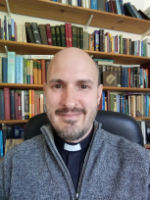 Rev Ian Folks has day-to-day responsibility for leading Christ Church.  Growing up in Cumbria and Hampshire, Ian came to Swansea as a student in 1993, fell in love with it and never left! After a fifteen year career in the social care, disability and voluntary sectors, he studied for ordination at St Michael's College, Cardiff and came to the parish as a curate in 2016.  He is now a permanent Assistant Priest here.

He is passionate about people deepening their lives of worship and service, and developing work with children and families in the church. He is married to Vanessa and they have two children, Daisy and Amelie. He enjoys playing guitar which he occasionally inflicts on the congregation, and enjoys (or suffers) following Tottenham and the England cricket team. 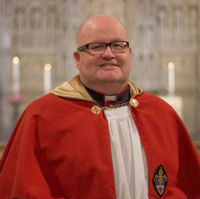 Canon Ian Rees is Rector of the Parish of Central Swansea, of which Christ Church is a part. Ian was born in Dinas Powys in 1966, the youngest of three children. As a young child he attended St Andrews Church in Dinas Powys, but then moved to All Saints Church in Penarth when his father became organist at that church. Beginning his working life he was taken on as part of the management development programme at Commercial Union and later worked as a Commercial Insurance Broker, specialising in business insurances.

In 1998 Ian began training for the ordained ministry at St Michael's College in Llandaff and was ordained Deacon in 2000 and Priest in 2001, both at Llandaff Cathedral. He served in Barry, Grangetown and Pyle in Llandaff diocese before moving to Swansea and Brecon diocese where he has served in Llandrindod, Gowerton and, since June 2016, in Central Swansea. He was made a Canon in Brecon Cathedral in April 2016. He also serves as the Diocesan Director of Ordinands and Vocations.

He is married to Helen (see below!) and they have a daughter Jessica, son in law Gary and three grand children, Jack, Ryan and Katie. Ian is a keen sports follower, particularly rugby, football and cricket. 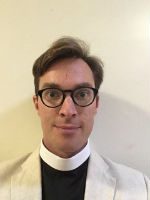 Rev Sam Aldred was born in 1987 and raised in the West Midlands. Despite an atheist upbringing he came to faith in his teenage years and was baptised whilst an undergraduate at Keble College, Oxford, in 2007.

Sam had a few jobs before seeking ordination. He was a perfume salesman in Kazakhstan, a marketeer in London, and a teacher of Russian history at Brighton College. In 2014 he returned to Oxford to read for an MPhil in Ecclesiastical History. During these two years he lived and worked as Sacristan of Pusey House, an Anglo-Catholic student chaplaincy at the heart of Oxford. In 2016 he went to St Stephen's House in Oxford for three years of theological training, emerging in June 2019. He was ordained in Brecon Cathedral on the 29th June and began his ministry in Swansea.

Sam is a keen walker, sea swimmer, and ephemerist. He was married to Helen in 2016 and in November 2019 their first son – Henry Cadwaladr Aldred – was born in Singleton Hospital.

In addition to the above clergy, Rev Helen Rees and Rev John Anthony are also licensed priests in the Parish of Central Swansea. They minister less frequently in Christ Church, but we are always happy to see them!